In 1896, a westernised version of Pachisi was published in England under the name Ludo (Latin for "I play"), a game which has been popular in that country ever since. The game however, is a highly simplistic version of Pachisi for children. The author has evidence that shows that a game called "Puchese" was published at the much earlier date of 11 April 1862 in England.
There is another less well-known descendent of Ludo called Uckers. The OED's earliest reference to this game sums it up well: "1946 J. Irving Royal Navalese 180 Uckers. A game very similar to Ludo, and played on a large board by teams of three or four men. " 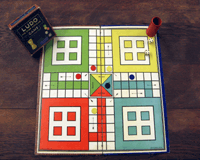 In fact, Uckers is a grown-up version of Ludo played with 2 dice instead of just one. This reverts it to being much closer to it's ancestor Pachisi and the decisions as to which piece to move for each die bear comparison with Backgammon, too.