Though kabaddi is primarily an Indian game, not much is known about the origin of this game. There is, however, concrete evidence, that the game is 4,000 year old. It is a team sport, which requires both skill and power, and combines the characteristics of wrestling and rugby. It was originally meant to develop self defense, in addition to responses to attack, and reflexes of counter attack by individuals, and by groups or teams. 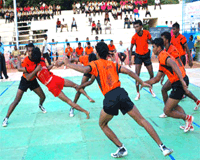 It is a rather simple and inexpensive game, and neither requires a massive playing area, nor any expensive equipment. This explains the popularity of the game in rural India. Kabaddi is played all over Asia with minor variations.
Kabaddi is known by various names viz. Chedugudu or Hu-Tu-Tu in southern parts of India, Hadudu (Men) and Chu - Kit-Kit (women) in eastern India, and Kabaddi in northern India.
The sport is also popular in Nepal, Bangladesh, Sri Lanka, Japan and Pakistan.

In Kabaddi, two teams compete with each other for higher scores, by touching or capturing the players of the opponent team. Each team consists of 12 players, of which seven are on court at a time, and five in reserve. The two teams fight for higher scores, alternating defense and offense. The court is as large as that for a dodge ball game. The game consists of two 20 minute halves, with a break of five minutes for change of sides.
The kabaddi playing area is 12.50m x 10m, divided by a line into two halves. The side winning the toss sends a 'raider', who enters the opponents' court chanting, 'kabaddi-kabaddi'. The raider's aim is to touch any or all players on the opposing side, and return to his court in one breathe. The person, whom the raider touches, will then be out. The aim of the opposing team, will be to hold the raider, and stop him from returning to his own court, until he takes another breath. If the raider cannot return to his court in the same breath while chanting 'kabaddi', he will be declared out. Each team alternates in sending a player into the opponents' court. If a player goes out of the boundary line during the course of the play, or if any part of his body touches the ground outside the boundary, he will be out, except during a struggle.

The team scores a lona (a bonus of two points), if the entire opposition is declared out. The game then continues by putting all the players on both sides. Matches are staged on the basis of age-groups, and weight. Seven officials supervise a match - one referee, two umpires, two linesmen, a time keeper and a scorer.

In India, Kabaddi is recognised in three forms: Surjeevani
The 'Surjeevani' form of Kabaddi is played under the Kabaddi Federation of India, and is governed by its rules and regulations. In the 'Surjeevani' form of Kabaddi, one player is revived against one player of the opposite team who is out. i.e. one out, one in. The duration of the game, the number of players, the dimensions of the court, etc. have been fixed by the Kabaddi Federation of India.

Gaminee
In the 'Gaminee' type of Kabaddi, there is no revival. When all the players of team are out, the game ends. So there is no time limit in this category.