Panchatantra story of the clever rabbit and foolish lion

The Foolish Lion and the clever Rabbit

Once upon a time there lived a ferocious lion in the forest. It was a greedy lion and started killing animals in the forest indiscriminately. Seeing this, the animals gathered and decided to approach the lion with the offer of one animal of each species volunteering itself to be eaten by the lion every day. So every day it was the turn of one of the animals and in the end came the rabbits' turn. The rabbits chose a old rabbit among them. The rabbit was wise and old. It took its own sweet time to go to the Lion. The Lion was getting impatient on not seeing any animal come by and swore to kill all animals the next day. 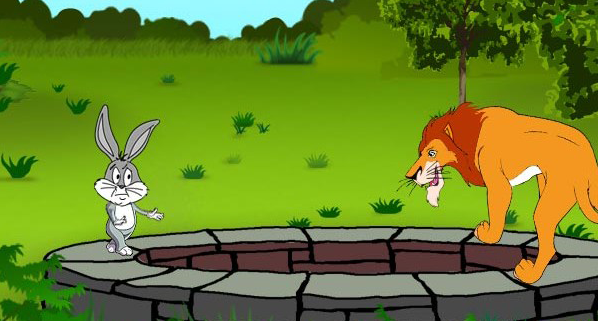 The rabbit then strode along to the Lion by sunset. The Lion was angry at him. But the wise rabbit was calm and slowly told the Lion that it was not his fault. He told the Lion that a group of rabbits were coming to him for the day when on the way, an angry Lion attacked them all and ate all rabbits but himself. Somehow he escaped to reach safely, the rabbit said.
He said that the other Lion was challenging the supremacy of his Lordship the Lion.The Lion was naturally very enraged and asked to be taken to the location of the other Lion.

The wise rabbit agreed and led the Lion towards a deep well filled with water. Then he showed the Lion his reflection in the water of the well. The Lion was furious and started growling and naturally its image in the water, the other Lion, was also equally angry.
Then the Lion jumped into the water at the other Lion to attack it, and so lost its life in the well. Thus the wise rabbit saved the forest and its inhabitants from the proud Lion.
MORAL:  Wit is superior to brute force

Is your family visiting you?
GET THEN INSURED
Find Affordable
TRAVEL INSURANCE!!
Click here »