Washington, is the capital of the United States. The states of Maryland and Virginia donated land along the Potomac River to form the federal district; however, Congress returned the Virginia portion in 1846. The City of Washington, located east of the preexisting port of Georgetown, was founded in 1791 to serve as the new national capital. Congress consolidated the whole District under a single municipal government in 1871.
BEST HOLIDAY PACKAGES
The centers of all three branches of the federal government of the United States are in the District, including the Congress, President, and Supreme Court. Washington is home to many national monuments and museums, which are primarily situated on or around the National Mall.An Algonquian-speaking people known as the Nacotchtank inhabited the area around the Anacostia River when the first Europeans arrived in the 17th century. However, the Nacotchtank people had largely relocated from the area by the early 18th century. 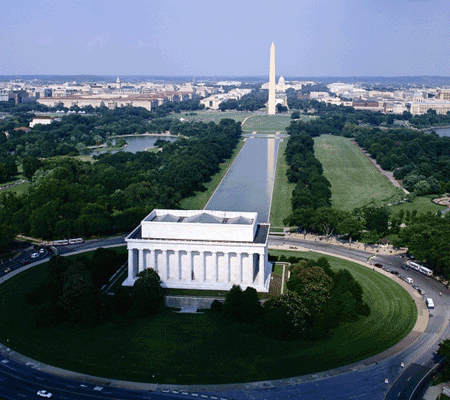 A new "federal city" was then constructed on the north bank of the Potomac, to the east of the established settlement at Georgetown. On September 9, 1791, the three commissioners charged with overseeing the capital's construction named the city in honor of President Washington. The federal district was named Columbia, which was a poetic name for the United States in use at that time.Washington is in the humid subtropical climate zone and exhibits four distinct seasons. Its climate is typical of Mid-Atlantic U.S. areas removed from bodies of water.

The District is in plant hardiness zone 8a near downtown, and zone 7b elsewhere in the city, indicating a temperate climate. The National Mall is a large, open park in downtown Washington between the Lincoln Memorial and the United States Capitol. Given its prominence, the mall is often the location of political protests, concerts, festivals, and presidential inaugurations. The Washington Monument and the Jefferson Pier are near the center of the mall, south of the White House.

Seattle, a city on Puget Sound in the Pacific Northwest, is surrounded by water, mountains and evergreen forests, and contains thousands of acres of parkland.

Spokane is a city in eastern Washington state. It's home to the Northwest Museum of Arts and Culture, which explores the region’s history through exhibits on art, culture and Native American heritage.

Yakima is a city in Washington state. It’s situated in the fertile Yakima Valley, known for its wineries and apple orchards. Yakima Valley Museum has exhibits on local history, including wooden wagons and a 1930s soda fountain.

Bus Routes: Buses on the DC Circulator’s five lines run between popular tourist spots such as Georgetown and Union Station, and arrive every ten minutes. The buses are spacious and relatively new, and with their bright-red paint and easy-to-spot signs

Metro: Metro opens at 5 am during the week and 7 on the weekends, and runs until 3 am Friday and Saturday and midnight all other days. The system is relatively clean and easy to use, and its six lines and 91 stations service most of the city and all the major suburbs.

Airports: Three major airports serve the District. Ronald Reagan Washington National Airport is across from downtown Washington in Arlington, Virginia and has its own Metrorail station. Given its proximity to the city, Reagan National has extra security precautions required by the Washington Air Defense Identification Zone. Major international flights arrive and depart from Washington Dulles International Airport, 26.3 miles (42.3 km) west of the District in Fairfax and Loudoun counties in Virginia. Baltimore-Washington International Thurgood Marshall Airport is 31.7 miles (51.0 km) northeast of the District in Anne Arundel County, Maryland.