Vancouver, is a coastal seaport city on the mainland of British Columbia, Canada. The 2011 census recorded more than 603,000 people in the city, making it the eighth largest among Canadian cities.The original settlement, named Gastown, grew around the Hastings Mill logging sawmill and a nearby tavern, both established in 1867.
BEST HOLIDAY PACKAGES
Enlarging to become the town site of Granville, with the announcement that the railhead would reach the site it was renamed "Vancouver" and incorporated as a city in 1886. Vancouver has ranked highly in worldwide "livable city" rankings for more than a decade according to business magazine assessments and it was also acknowledged by Economist Intelligence Unit as the first city to rank among the top-ten of the world's most livable cities for five straight years. 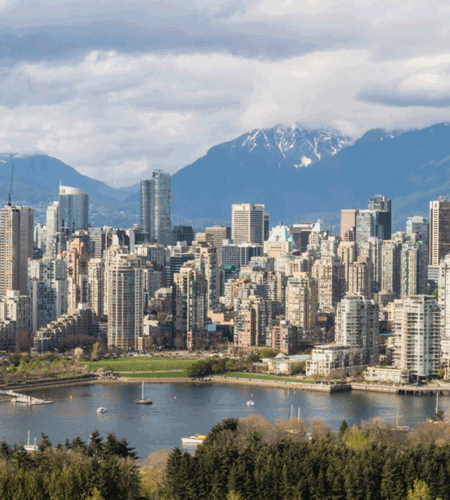 Vancouver is among British Columbia's youngest cities; the first European settlement in what is now Vancouver was not until 1862 at McLeery's Farm on the Fraser River, just east of the ancient village of Musqueam in what is now Marpole. The City of Vancouver was incorporated on April 6, 1886, the same year that the first transcontinental train arrived. CPR president William Van Horne arrived in Port Moody to establish the CPR terminus recommended by Henry John Cambie, and gave the city its name in honour of George Vancouver. Located on the Burrard Peninsula, Vancouver lies between Burrard Inlet to the north and the Fraser River to the south. The Strait of Georgia, to the west, is shielded from the Pacific Ocean by Vancouver Island.

Vancouver has a vibrant nightlife scene, whether it be food and dining, or bars and nightclubs. The Granville Entertainment District has the city's highest volume of bars and nightclubs with closing times of 3am, in addition to various after-hours clubs open until late morning on weekends. The street can attract large crowds on weekends and is closed to traffic on such nights.Libraries in Vancouver include the Vancouver Public Library with its main branch at Library Square, designed by Moshe Safdie. The Vancouver Art Gallery has a permanent collection of nearly 10,000 items and is the home of a significant number of works by Emily Carr.

Coal Harbour is a downtown area known for its marina, mountain views, and mix of casual and upscale waterside eateries. Seaplanes take off in the shadow of gleaming condo towers near the modern, grass-roofed Vancouver Convention Centre.

Lakes Trail are just a few of the features of this park, just north of Squamish on the way up to Whistler. Popular with families, the Alice Lake campground features a swimming area and a lovely trail around the lake for evening strolls and a lively atmosphere.

On the west side of Vancouver Island is the quaint little town of Tofino. This fishing village is also the main destination in the area for visitors coming to see Pacific Rim National Park.

Street cars: Vancouver's streetcar system began on June 28, 1890, and ran from the Granville Street Bridge to Westminster Avenue. Less than one year the Westminster and Vancouver Tramway Company began operating Canada's first interurban line between the two cities and beyond to Chilliwack.

Electric Train: The British Columbia Electric Railway became the company that operated the urban and interurban rail system, until 1958 when its last vestiges were dismantled in favour of "trackless" trolley and gasoline or diesel buses.Other modes of transport add to the diversity of options available in Vancouver. Inter-city passenger rail service is operated from Pacific Central Station by Via Rail to points east; Amtrak Cascades to Seattle; and Rocky Mountaineer rail tour routes.

Airports: The recently completed Canada Line, opened on August 17, 2009, connects Vancouver International Airport and the neighbouring city of Richmond with the existing Sky Train system. The Evergreen Line is planned to link the cities of Coquitlam and Port Moody with the Sky Train system by summer 2016.