Tokyo, is the capital of Japan, and it is also called as the largest metropolitan area in the world and formed buy the chain of islands. Tokyo is situated in the southeastern part of the islands.The city hosts 47 of the Fortune Global 500 companies. Tokyo has been rehearsed as one of the three "command centers" for the world economy, along with New York City and London. Tokyo was originally a small fishing village named Edo, and basically it is the part of the old Musashi Province.
BEST HOLIDAY PACKAGES
During the subsequent Edo period, Edo grew into one of the largest cities in the world with a population of around one million by the 18th century. Tokyo became the de facto capital of Japan even while the emperor lived in Kyoto, the imperial capital.Central Tokyo, like Osaka, has been designed since about 1900 to be centered on major railway stations in a high-density fashion, so suburban railways were built relatively cheap. This differs from many cities in the United States that are low-density and all are automobile based. 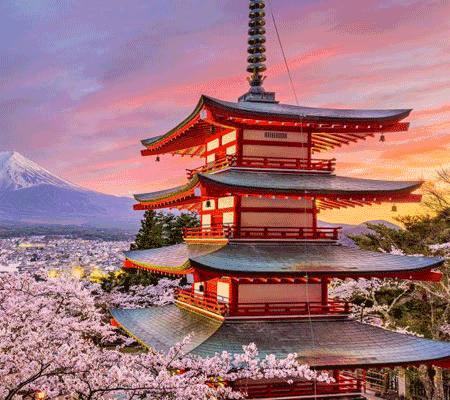 Tokyo suffered with two major hazards, but soon it recovered from the both. One was the 1923 Great Kanto earthquake, which left 140,000 dead or missing, and the other was World War II. The half of the city was destroyed in 1944 and 1945 due to the bombing in Tokyo with 75,000 dead, was almost as devastating as the atomic bombs of Hiroshima and Nagasaki combined. Tokyo's subway and commuter rail network became one of the busiest in the world. The mainland of Tokyo lies northwest of Tokyo Bay and it's upto about 90 km east to west and 25 km north to south. The average elevation in Tokyo is 40 m. Chiba Prefecture to the east, Yamanashi to the west, Kanagawa to the south, and Saitama to the north.

Within the Chiyoda Ward of Tokyo is a place known as Akihabara, a major shopping and electronics district.

Tokyo Skytree is a broadcasting, restaurant, and observation tower in Sumida, Tokyo, Japan.

Sensō-ji is an ancient Buddhist temple located in Asakusa, Tokyo, Japan. It is Tokyo's oldest temple, and one of its most significant.

The meaning of Rikugien is "Garden of the Six Principles of Poetry" and rather interestingly poetry inspired scenery was created in the miniature landscape.

Roads: Tokyo, is Japan's largest domestic and international center for rail, air, and ground transportation. Public transportation within Tokyo is ruled by an extensive network of clean and efficient trains and subways, with buses, monorails.

Railway: Rail is the primary mode of transportation in Tokyo, which has the most extensive urban railway network and exclusive surface lines.JR East operates Tokyo's largest railway network, including the Yamanote Line loop that circles the center of downtown Tokyo. Two organizations operate the subway network: the private Tokyo Metro and the governmental Tokyo Metropolitan Bureau of Transportation. Local, regional, and national services are available, with major terminals at the giant railroad stations, including Tokyo, Shinagawa, and Shinjuku.