New York, is a state in the Northeastern region of the United States. New York is the 27th most extensive, the 3rd most populous, and the 7th most densely populated of the 50 United States. New York is bordered by New Jersey and Pennsylvania to the south and by Connecticut, Massachusetts and Vermont to the east.
BEST HOLIDAY PACKAGES
It is known for its status as a center for finance and culture and for its status as the largest gateway for immigration to the United States. According to the U.S. Department of Commerce, New York City is also a destination of choice for many foreign visitors. New York was inhabited by various tribes of Algonquian and Iroquoian speaking Native American tribes at the time Dutch settlers moved into the region in the early 17th century. In 1609, the region was first claimed by Henry Hudson for the Dutch. Fort Nassau was built near the site of the present-day capital of Albany in 1614. 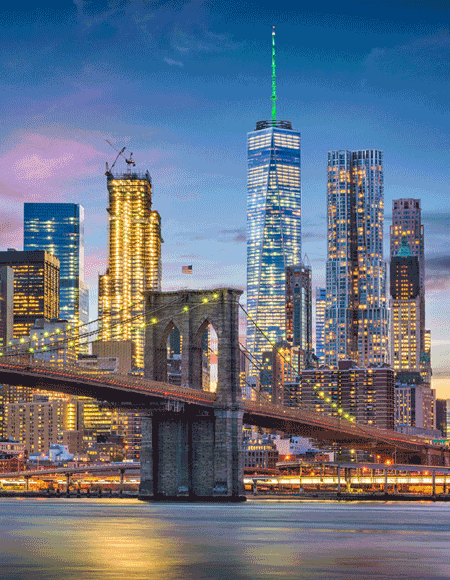 The borders of the British colony, the Province of New York, were roughly similar to those of the present-day state. The first major battle of the American Revolutionary War after independence was declared-and the largest battle of the entire war-was fought in New York at the Battle of Long Island in August 1776. British victory made New York City their military and political base of operations in North America for the duration of the conflict, and consequently the center of attention for General George Washington's intelligence network.The first of two major British armies were captured by the Continental Army at the Battle of Saratoga, influencing France to ally with the revolutionaries.
Ellis Island was the main facility for immigrants, entering the United States in the late 19th century to the mid-20th century. It was opened when the federal government took over the responsibility for processing immigrants, prior to that it was the responsibility of the states. The Statue of Liberty, designed by Frederic Bartholdi, was a gift from France to the United States to mark the Centennial of the American Declaration of Independence. The idea of giving a colossal representation of republican virtues to a "sister" republic, across the sea, served as a focus for the republican cause against other politicians. The Statue of Liberty was dedicated in New York Harbor on October 28, 1886.

New York has many state parks and two major forest preserves. Adirondack Park, roughly the size of the state of Vermont and the largest state park in the United States, was established in 1892 and given state constitutional protection to remain "forever wild" in 1894. The Catskill Park was protected in legislation passed in 1885, which declared that its land was to be conserved and never put up for sale or lease. Consisting of 700,000 acres of land, the park is a place for bobcats, minks and fishers.

Central Park is an urban park in Manhattan, New York City. It is located between the Upper West Side and Upper East Side, roughly bounded by Fifth Avenue on the east

Roads: Population expansion of the state generally followed the path of the early waterways, first the Hudson River and then the Erie Canal. Now-a-days, railroad lines and the New York State Thruway follow the same general route. The New York State Department of Transportation is often blamed for how they maintain the roads of the state in certain areas and for the fact that the tolls collected along the roadway have long passed their original purpose. Until 2006, tolls were collected on the Thruway within The City of Buffalo.