Chicago is the capital of Illinois. The city has approximately 2.7 million residents. It is also called as "Chicagoland", and it is the third-largest in the United States, with an estimated 9.8 million people. During the mid-18th century, the area was inhabited by a Native American tribe known as the Potawatomi, who had taken the place of the Miami and Sauk and Fox peoples. The 1780s saw the arrival of the first known non-indigenous permanent settler in Chicago, Jean Baptiste Point du Sable, who is believed to be of Haitian and French descent. In 1795, following the Northwest Indian War, an area that was to be part of Chicago was turned over by some Native Americans in the Treaty of Greenville to the United States for a military post
The name "Chicago" is derived from a French word of the Native American word shikaakwa, translated as "wild onion" or "wild garlic," from the Miami-Illinois language. The first known reference to the site of the current city of Chicago as "Checagou" was by Robert de LaSalle around 1679 in a memoir written about the time.
BEST HOLIDAY PACKAGES 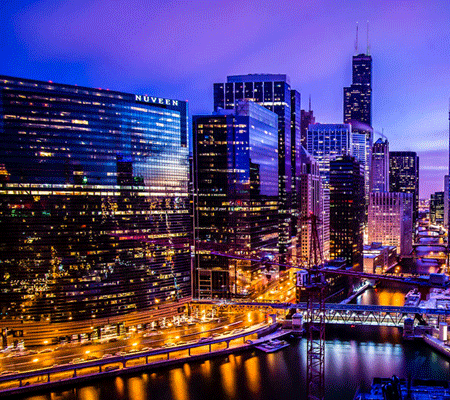 Chicago is located in northeastern at the southwestern tip of Lake Michigan. It is the principal city in Chicago Metropolitan Area situated in the Midwestern United States and the Great Lakes region. Chicago fits on a continental divide at the site of the Chicago Portage, connecting the Mississippi River and the Great Lakes watersheds. The city lies beside freshwater Lake Michigan, and two rivers the Chicago River in downtown and the Calumet River in the industrial far South Side - flow entirely or partially through Chicago.
The results of the Great Chicago Fire led to the largest building boom in the history of the nation. In 1885, the first steel-framed high-rise building, the Home Insurance Building, rose in the city as Chicago evolved in the skyscraper era, which would then be followed by many other cities around the world. Today, Chicago's skyline is among the world's tallest and most dense. The United States two tallest towers are both located in Chicago, Willis Tower (formerly Sears Tower, and the tallest building in the Western Hemisphere), and Trump International Hotel.

The Navy Pier originally opened in 1916 as an amusement area and shipping facility but is now one of Chicago's most popular tourist attractions. Today, the Navy Pier is made up of 50 acres of gardens, attractions, shops, restaurants, concert venues, and parks.

Built in 1927 as a donation from the family, the Clarence Buckingham Memorial Fountain is one of the largest in the world. Designed in the period's iconic Art Deco style, the central fountain is surrounded by four seahorses that represent Lake Michigan's four bordering states.

When talking about the most exquisite places to see in Chicago, the Art Institute has to be on the list as it houses a collection of more than 300,000 pieces of artwork.

Known for hosting the concerts and festivals, this is one of the most popular Chicago attractions which is all about the city’s weekend vibe. You’ll find interesting sculptures and contemporary installations all over this 25-acre park while taking an evening stroll

Trains: Transit Systems: The Regional Transportation Authority (RTA) coordinates the operation of the three service boards: The Chicago Transit Authority, (CTA) handles public transportation in the city of Chicago and a few adjacent suburbs outside of the Chicago city limits. The CTA operates an extensive network of buses and a rapid transit elevated and subway system known as the 'L' (for "elevated"), with lines designated by colors. These rapid transit lines also serve both Midway and O'Hare Airports. The CTA's rail lines consist of the Red, Blue, Green, Orange, Brown, Purple, Pink, and Yellow lines. Both the Red and Blue lines offer 24 hour service which makes Chicago one of a handful of cities around the world (and one of two in the United States -the other being New York City) to offer rail service 24 hours a day, every day of the year, within the city's limits. Metra, the nation's second-most used passenger regional rail network, operates an 11-line commuter rail service in Chicago and throughout the Chicago suburbs. The Metra Electric Line shares its track age with Northern Indiana Commuter Transportation District's South Shore Line, which provides commuter service between South Bend and Chicago. Pace, provides bus and para transit service in over 200 surrounding suburbs with some extensions into the city as well. A 2005 study found that one quarter of commuters used public transit.
Port authority: The Port of Chicago consists of several major port facilities inside the city of Chicago operated by the Illinois International Port District. The central element of the Port District, Calumet Harbor, is maintained by the U.S. Army Corps of Engineers.