Bangkok is the capital city of Thailand. Bangkok has a population of about 12 million people. In the 15th century Bangkok was a small trading village situated near the Chao Phraya River. In the year 1767 Ayutthaya handed over the kingdom to Burmese. Taksin, the new king of Burmese kingdom established his capital in the Bangkok village and then King Buddha Yodfa Chulaloke succeeded the king Taksin, later in the year 1782 he moved the capital to the eastern bank.
BEST HOLIDAY PACKAGES 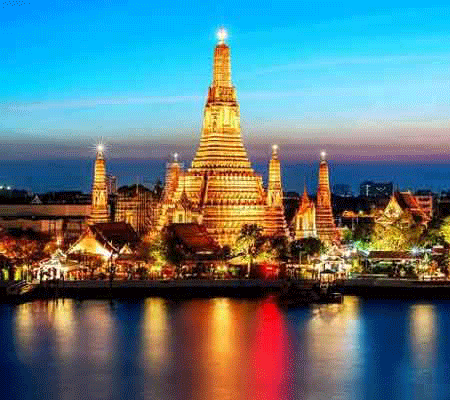 Bangkok, is one of two administrative areas in Thailand, the other being Pattaya, in which citizens are free to choose their governor. Bangkok is divided into 50 districts, which are further subdivided into 169 kwaeng. Chief is the head of each district who is appointed by the governor.

Bangkok lies about 6.5 feet above the sea level, which has the advantage to protect the city during the floods in the monsoon region. The Bangkok Metropolitan Administration (BMA) has established the higher banks alongside the canals to keep water level from reaching the street level. According to the Koppen climate classification Bangkok has wet and dry climate. Average temperature in the city is about 2°C.

Located in the heart of Bangkok, on the banks of Chao Phraya River, the Grand Palace is a magnificent building and one of the most popular tourist attractions of Bangkok.

A Bangkok Tour is incomplete without sampling its distinctive traditional cuisine and Chao Phraya River cruise.

The Temple of Emerald Buddha or the Wat Phra Kaew is considered as the most sacred Buddhist temple in Thailand.

Located to the south of the Grand Palace, Wat Pho or Wat Phra Chetuphon is one of the largest Buddhist temple complexes in Bangkok.

Roads: Road-based transport is the primary mode of travel in Bangkok. Due to the city's organic development, its streets do not follow an organized grid structure. Forty-eight major roads link the different areas of the city, branching into smaller streets and lanes (soi) which serve local neighbourhoods. Eleven bridges over the Chao Phraya link the two sides of the city, while the Ratchadaphisek inner ring road encircles the inner city.

Airports: Suvarnabhumi International Airport: also known as new Bangkok International Airport, serving Bangkok, Thailand. Suvarnabhumi handles both domestic flights and international flights. This airport is the center for Thai Airways International, Bangkok Airways, Orient Thai Airlines and Thai Air Asia. It also serves as regional gateway and a connecting point for various foreign carriers.
Don Mueang International Airport: is also serving Bangkok, Thailand. It was opened as a Royal Thai Air Force base on 27 March 1914. Commercial flights began in 1924. Don Mueang Airport closed in 2006 following the opening of Bangkok's new Airport called Suvarnabhumi. Don Mueang was an important center for Asia and Thai Airways International before its closure. It had 80 airlines operating 160,000 flights, handling over 38,000,000 passengers and 700,000 tons of cargo in 2005. It was the 18th crowded airport in the world.